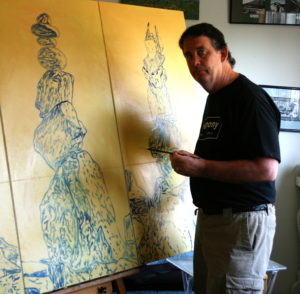 Leigh Cohn is a self-trained oil painter from Carlsbad, CA who has given away about 250 paintings for walls in homes and offices throughout the United States and a few foreign countries. Twenty of his canvases decorate the walls of San Diego’s Balboa Park Conservancy, one of which was used as the artwork for the 2016 Balboa Park Explorer Pass. His work has also been shown at the San Diego Museum of Photographic Arts and the Charity Wings Arts & Crafts Center in San Marcos, CA. A large representation of a local landmark hangs in Carlsbad City Hall, and a nine-foot wide seaside triptych is on display in Tilburg, The Netherlands.

In addition to painting, Leigh Cohn, M.A.T., CEDS is the retired publisher of Gürze Books, a company that has specialized in eating disorders education and publications since 1980, which he owned with his wife, Lindsey. They have two sons, Neil and Charlie.

During his professional years, Cohn coauthored 18 books, spoke at scores of colleges and universities, and received numerous awards. His travels brought him to most major cities in the United States and many internationally. He and Lindsey are regarded as pioneers of the eating disorders field. Throughout the final 25 years of his career and into retirement in 2018, he has gained skills and prominence with his paintings, which are all referenced at this website.

Leigh Cohn, M.A.T., CEDS was the Publisher of Gürze Books, a company that has specialized in eating disorders education and publications since 1980. Before retiring, he was also founder and Editor-in-Chief of EATING DISORDERS: The Journal of Treatment and Prevention (Routledge) and publisher of Eating Disorders Review, a clinical newsletter, and Eating Disorders Recovery Today, a newsletter for individuals in recovery and their loved-ones.

The co-author of several books (see list), he is best known for Making Weight and his work on men's issues, as well as BULIMIA: A Guide to Recovery, the first publication on bulimia, which he co-authored with his wife, Lindsey Hall, and which has sold more than 175,000 copies. This book, and their classic, Self-Esteem Tools for Recovery, and others have been translated into Spanish, Japanese, Chinese, Italian, French, and Czech. He has also co-edited clinical books including Sexual Abuse and Eating Disorders and Self Harm and Eating Disorders, and Current Findings on Males and Eating Disorders, which was released in 2013.

Gürze Books, which was owned by Leigh and Lindsey until 2018, has released such important titles as Eating in the Light of the Moon (Johnston), Father Hunger and Body Wars (Maine), The Rules of "Normal Eating" (Koenig), The Body Betrayed (Zerbe) and many others. They founded the Gürze Eating Disorders Resource Catalogue, the most widely-used resource in the eating disorders field and bulimia.com, both of which they sold in 2013.

Leigh is also a past president of Publishers Marketing Association (PMA)-now called Independent Book Publishers Association-a non-profit trade association of 3500 publishing companies throughout the United States. An authority on publishing, he has been a featured speaker at conferences in New York, Alaska, Miami, Los Angeles, Denver, Arizona, and London.

(All books published by Gürze Books except where noted.)