Several years ago, my wife, Lindsey, and I visited a relative whose late husband was a struggling, though respected, Abstract Expressionist in New York. Although his paintings had been in galleries, museums, and private collections, he died without reaching the higher levels of the art market. Our relative had remained in their vast apartment near Central Park, which housed the late painter’s studio. In it were hundreds of canvases piled on top of each other. Some were stuck together with thick globs of oil paint that hadn’t fully dried when added to the pile decades earlier. The volume was overwhelming and his widow didn’t know what to do with them. I was horrified!

I want my paintings on walls not stacked up in an attic. I’ve known too many painters with storage units housing artworks that will, literally, never see the light of day. That’s how I feel now; but even before I got serious about painting, I liked how it felt to give pieces away.

During college, I worked in a photo lab for the campus yearbook and newspaper, and later entered an art school to study photography—only lasting one semester before dropping out—so, I was used to having my photos seen and even sold. Around that time, I started to dabble with painting and gave a few Early Works to my parents, sister, and aunt. 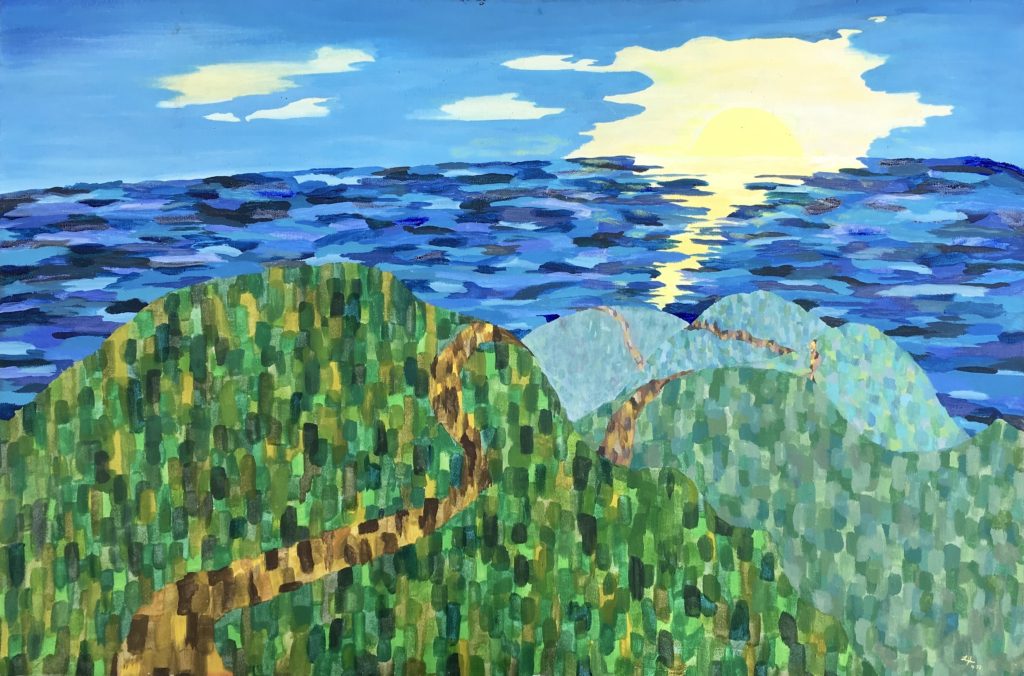 I liked having my artwork on display. As I mention in my Artist’s Statement, when I was a child I went to the Art Institute of Chicago to gaze at the Impressionist paintings. I can remember a heartfelt sensation that maybe, someday, I could be a painter like that—a dream that was always in the back of my mind, as it must be for most aspiring artists. It didn’t dawn on me how my work would find an audience, nor that one day they would be “priceless,” which is what I often tell people.

Turned Off to Selling

I met Lindsey Hall at an arts and crafts fair in 1977, where I was selling flying toys for a friend and she had a booth of her soft-sculpture dolls. After falling in love at first sight, we expanded her “Gürze Designs” doll business. As this 1984 video clip shows, the dolls took off, and in addition to the hundreds of stores where they were sold, we also attended lots of fairs.

Even though we wholesaled a quarter-million handmade dolls, we struggled financially.  The fairs were horrendous. The thing that I most detested was when someone would “absolutely love” the dolls and laugh at how funny they were, but wouldn’t buy one. I saw the same dynamic replayed at every other artist’s and craftsperson’s booth, as well.

That feeling stuck with me, and even though I was a decade away from taking up oils regularly, I knew I did not want to ever go through the experience of putting my artistic work front and center to be rejected by the public. Because I’d had no training and didn’t really know what I was doing, I painted without outside opinions. I developed my own style and techniques, and that included not following a path towards galleries and gift shops—all of which were outlets for Gürze Designs.

Around the start of the new millennium, I’d been painting more and more, and when friends would compliment a piece, I’d offer it to them. Even when I might have felt that the pictures were flawed, I figured if someone wanted one, they could have it. Here are a few examples from that period: 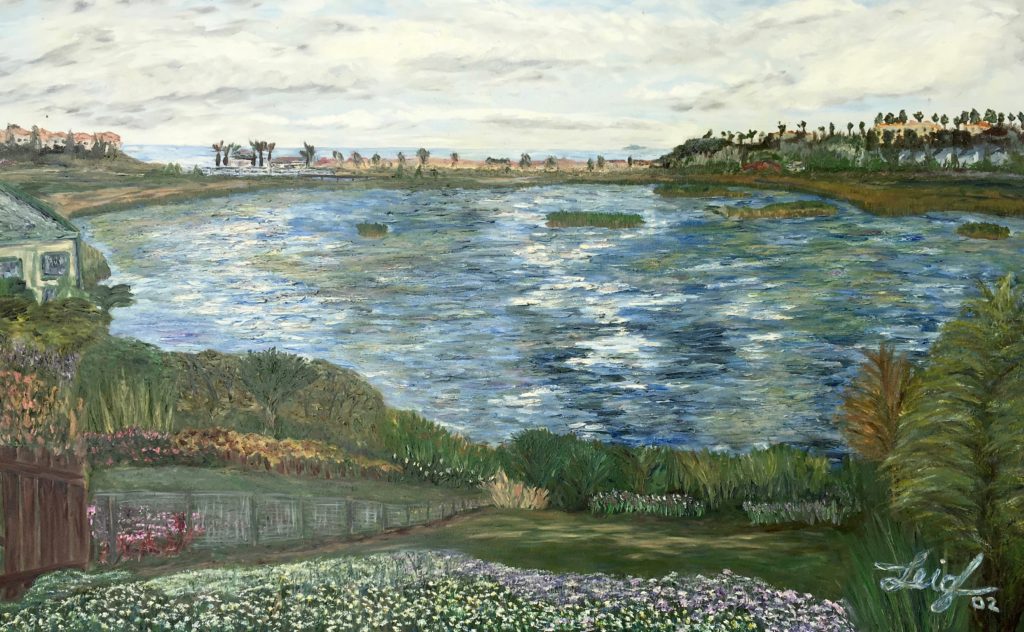 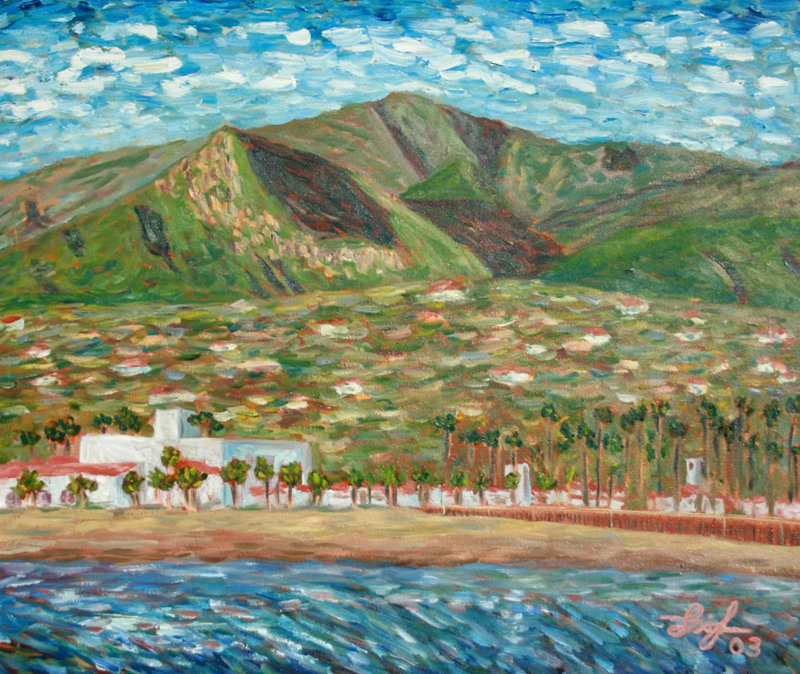 Everyone Wants a Free Painting!

Having those friends hang my paintings in their homes gave me confidence, and, as is evident by the All Paintings chronological gallery, my output steadily increased with their validation. Of course, I was only a “hobbyist,” but I wasn’t shy about talking about painting or showing pictures of my latest canvases. Around that time, our professional lives also shifted. The doll business had ceased years earlier, and we were writing and publishing books, including the first ever written about bulimia. Our company, Gürze Books, became the world’s leading resource for information on eating disorders. I traveled extensively to professional conferences and speaking engagements, and wherever I went, I felt driven to let everyone know that—in addition to writing, publishing, and pioneering the eating disorders field—I was an oil painter. And, I gave my artwork away! I unabashedly featured paintings as title cards in my PowerPoint talks, simply because I felt compelled to do so.  Subsequently, I’ve given scores of my paintings to therapists throughout the United States and in several other countries, as well. 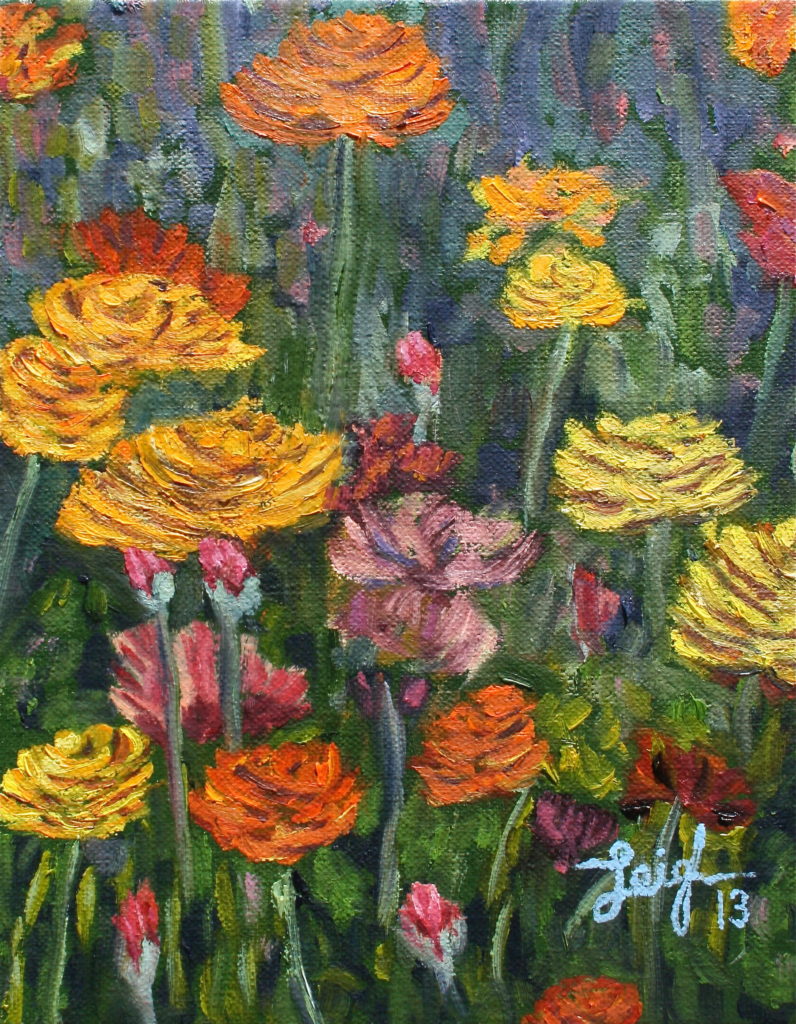 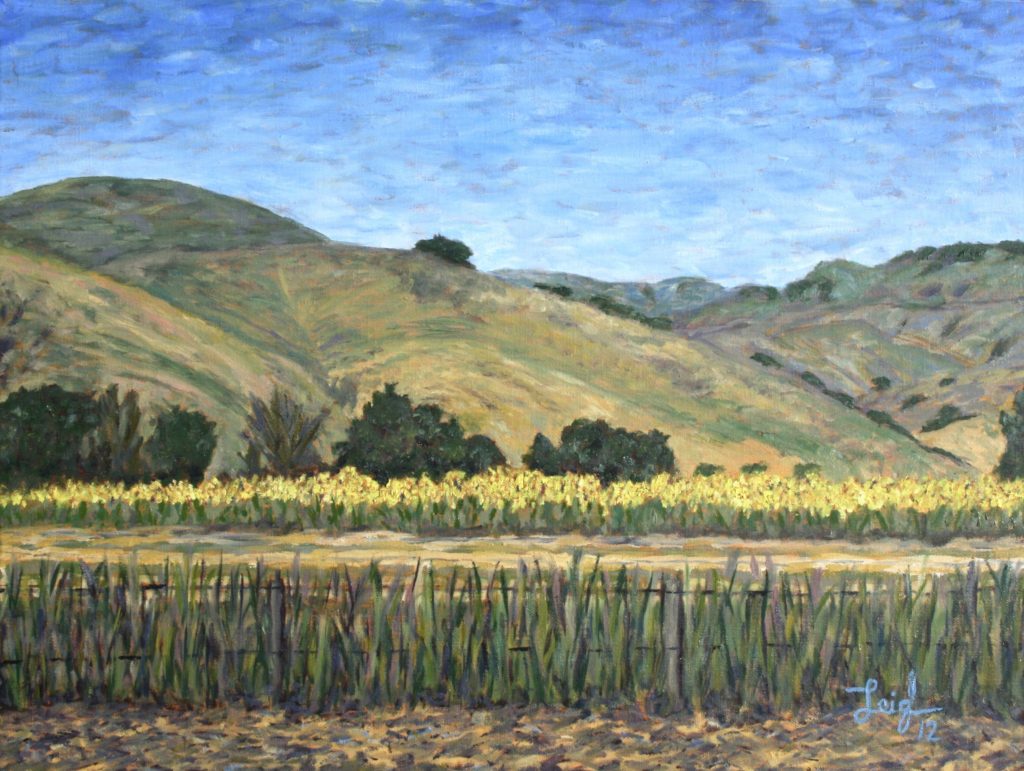 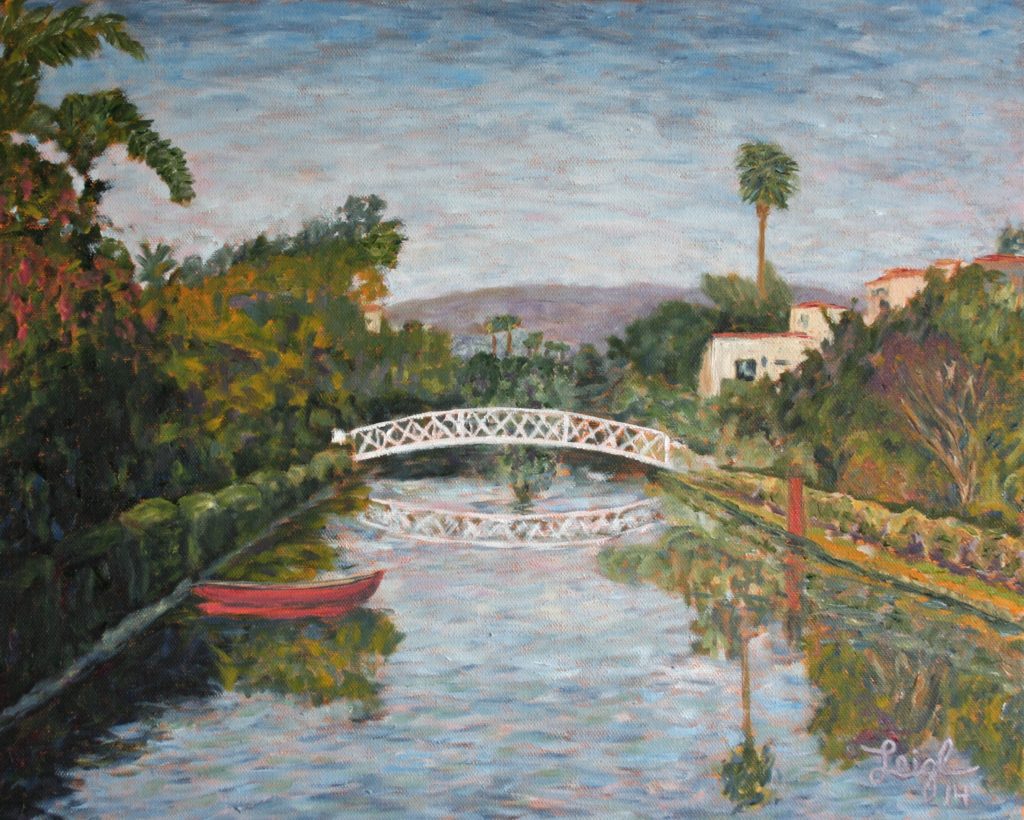 While my artist friends were bending over backward to sell a small percentage of their paintings, mine were getting hung all over the place. The book business was good, and I felt that I could afford to give more away. The costs were small compared to the satisfaction I was getting by knowing that friends and strangers were seeing my artwork every day. At first, I thought it was cool that my loved ones would think of me whenever they noticed my paintings on their walls; but, when eating disorders treatment centers started hanging them up I really liked the idea that the moments of meditation and inspiration I experienced during the painting process would somehow rub off on the viewers.

When the Balboa Park Conservancy agreed to accept twenty of my pictures for their offices, I could not have been happier. Most exciting is that their boardroom is the locale for meetings with representatives from the park’s 17 museums and other dignitaries. 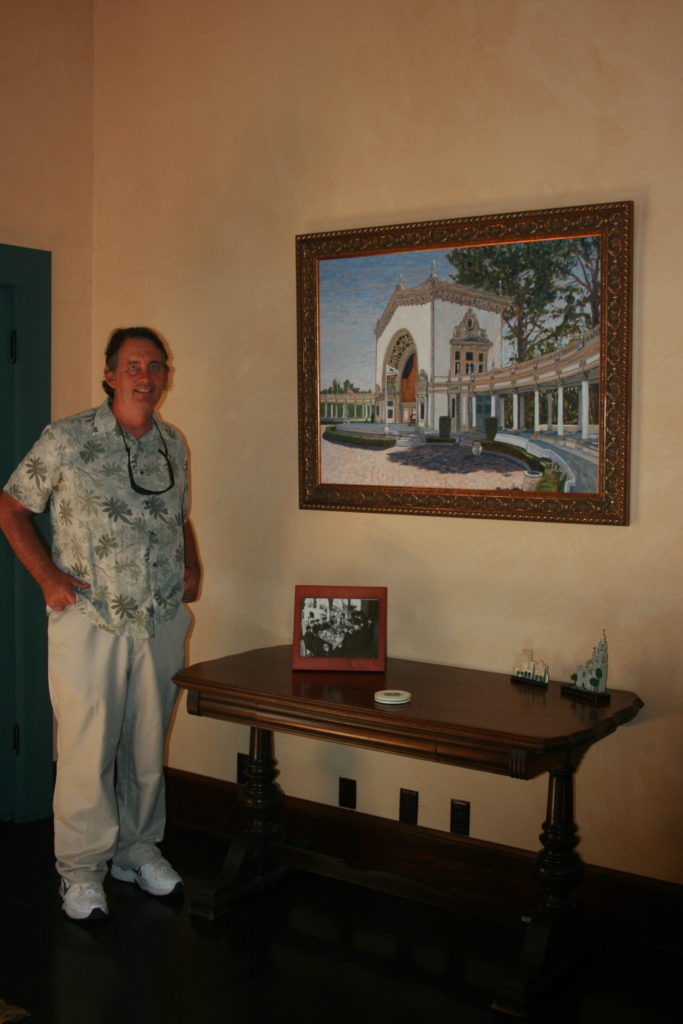 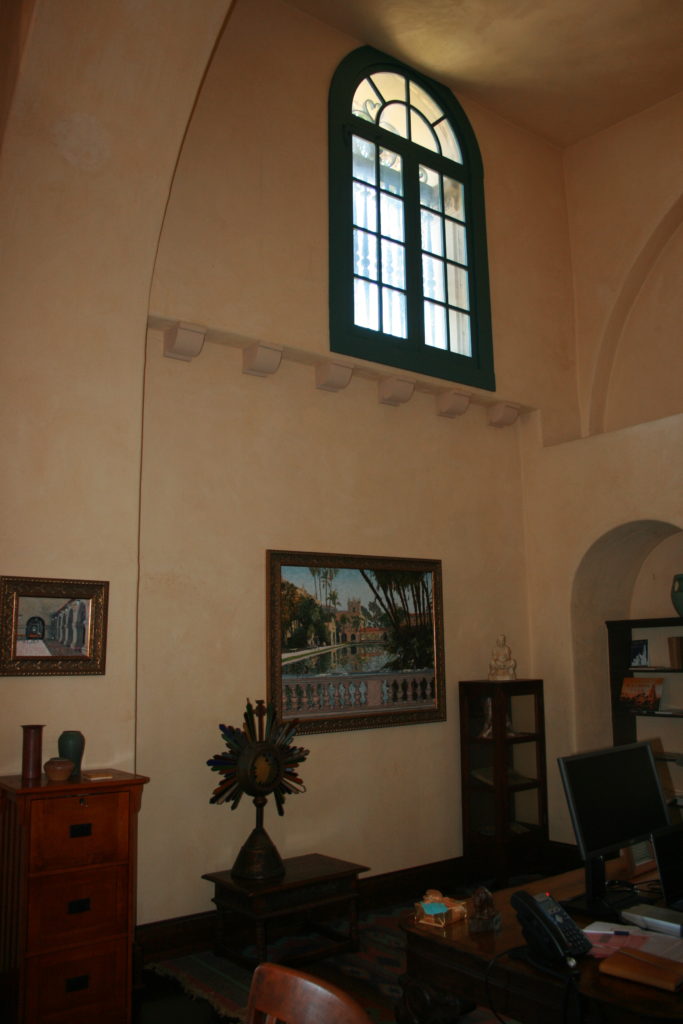 Lindsey and I enjoy watching the “Antiques Roadshow” on television, especially when participants bring in paintings by obscure artists. I’m amazed by how much the expert knows, and based on what I hear, I can usually estimate the value pretty closely. I like to think that on a show someday far in the future, someone will bring an old, framed canvas passed down from their parents and grandparents. The expert will see my signature, find LeighPaintings.com (or whatever source is in use by then), and will say, “It’s hard to put a value on that piece…”

For me, the value comes in having people see them.

Be sure to check under Available Paintings to find out about receiving one of my pictures.